Haunted Urinals of the Midwest 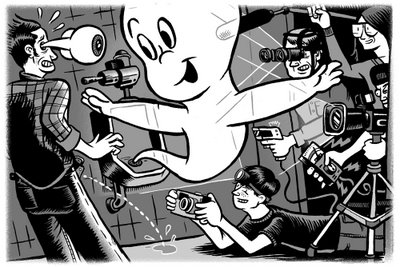 Here's an illustration I drew for this week's RFT for a story about the investigative work of Missouri Paranormal Research. It's based on a particular incident at Route 66 landmark the Tri-County Restaurant, out in Villa Ridge. Here's a snapshot taken later in the very same bathroom. Note the misty apparition hovering to left of the urinals. 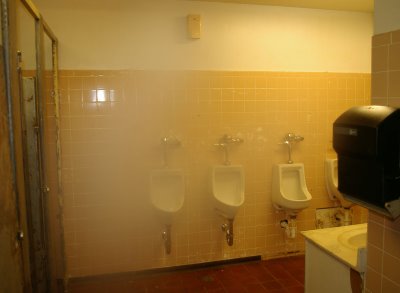 A few years ago my pal Ted turned me on to the greatness of old Harvey Comics Casper covers, especially the ones where he shows up and freaks people out. For a while I was into doing doodles of that cute little spook popping out of weird places, despite the fact that a) I had no idea how to draw Casper and b) could never really figure out how to spell his name. Please keep in mind I usually drew these in bowling alleys or lame punk clubs. 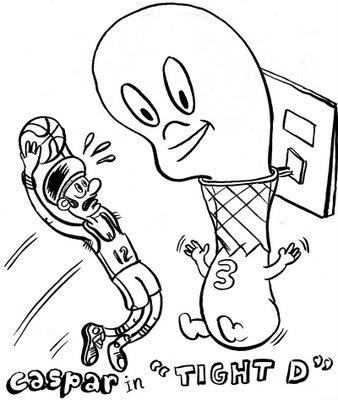 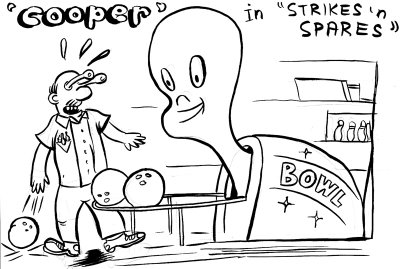 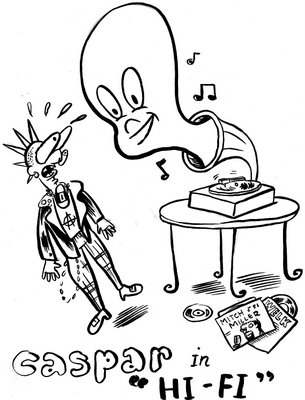 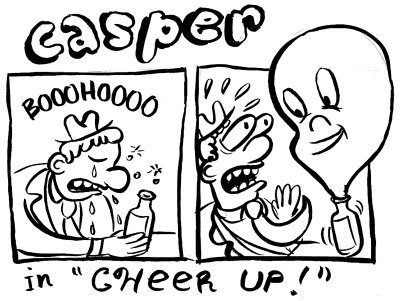 And clearly, this idea had been something on my mind, even years ago - an ancient archetypal image if I ever saw one: 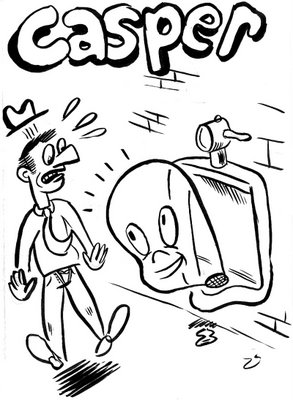 I've used the same device for a bunch of drawings. Usually it doesn't make sense, but sometimes it does, like in this illustration about Wilco's album A Ghost is Born getting "leaked": 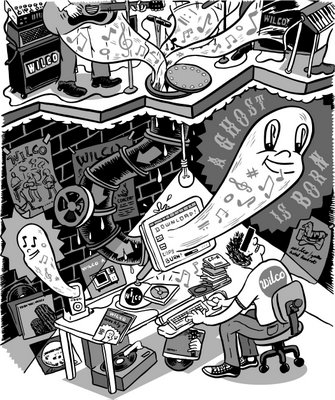 The only thing better than a good ghost is a good urinal. Here's the one my brother and I bought for my Dad for Father's Day a few years ago, in our basement in Louisville. He'd been angling for a facility in the basement (closer to his workshop/studio) for a long time, and the only way we could get our Mom to go for it was to hide it behind a curtain or door or something. Dad more than obliged her, as seen in this before and after shot: 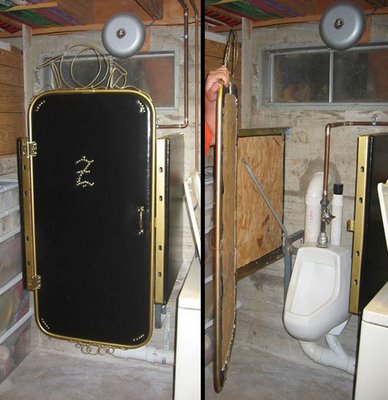 A couple of things about that picture:
1) The word 'Toots' (as in 'Tootsie Roll'), sculpted in classy gold wire above the door, is my Dad's nickname.
2) That crazy bell overhead is for pulling a prank on first time urinators. I'm not sure who the prank is on, since we are the ones who'd have to clean up.
In a final bit of chilling convergence, here's the album I was listening to while doing that original ghost-hunting drawing - The Repo's new LP, "Hearts and Heads Explode", on Youth Attack Records:

He is a cute little spook! That misty ghost should be submitted to coast to coast if it hasn't already been.

Wow. That's the single best father's day present ever, especially judged on the "how uncomfortable does this make your mom" scale. The bell is the coup de grace.

MPR are a bunch fo frauds and morons. Funny thing about the urinals,they must have a urine fetish. Greg tried to record EVP while urinating.
Breaking in to cash registers while investigating, talking about having bad thoughts about kids, lying, stealing, yeah... not to mention being the laughingstock of the paranormal community - THATS MPR. THATS professionalism!

If I were you I woudlnt want my name associated with them.

Anonymous called it right! This group does have an obsession with urniation and they include thieves in on their investigations. This group is not professional, they are unorganized and I would not allow them into my home or business to do an investigation. The entertainment they provide is priceless though, at the next kid's birthday party instead of hiring a clown, hire MPR but keep a close eye on them.

Typically, I will not bash anyone. Even if I don't care for them, I will refrain from making any comment whatsoever. Regarding MPR though, I feel I must speak out.
I am a long-timer in the field of paranormal research and have a fairly recognizeble name, therefore, I will remain anonymous but I will be as delicate as I can and yet preserve the truth in my statements. MPR have, in the past year, made a name for themselves as frauds that manipulate their photographic, videographic and audio evidence. It is readily apparent to most of us across the country that are to greater and lesser degrees experienced. Many of the photos they use are Photoshopped. Their photos have been subjected to a pixel by pixel analysis and have been proven to be manipulated. The same thing goes for their EVP recordings that they offer up as evidence. After subjecting the clips to Adobe's Audition they are clearly fraudulent. As for their personal vices, preferences and behaviors, I cannot speak to that but I can assure readers that the paranormal community at large does not respect nor recognize their work.