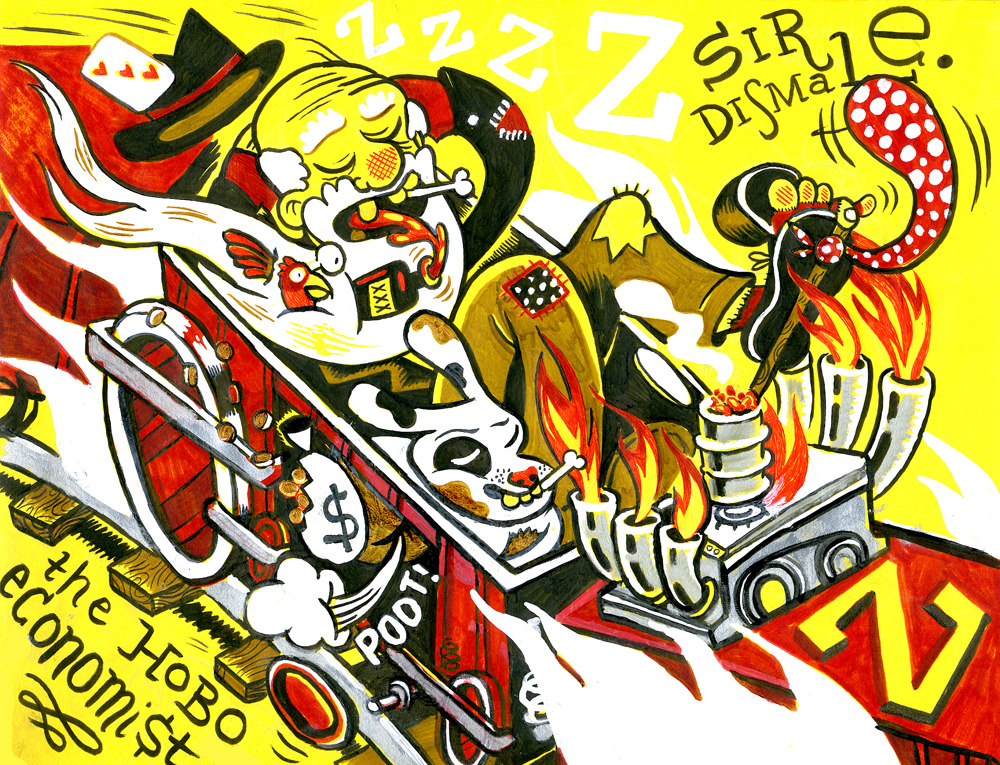 I'm hitting the rails, skipping town for a couple of weeks. In particular, between January 25th and 28th, I'll be at the Festival international del la Bande Dessinée in Angouleme, France. If you're gonna be over there, try and come find me over by the Buenaventura / Kramers Ergot / Comic Art booths in the 'Espace Alternative BD' area. If you're not gonna be in France, but you may be in, say, Minneapolis, there's a Kramers Ergot art show opening at Macalester College on the 28th. A bunch of my original pages from Kramers 5 & 6 will be in the show. Here's one of them: 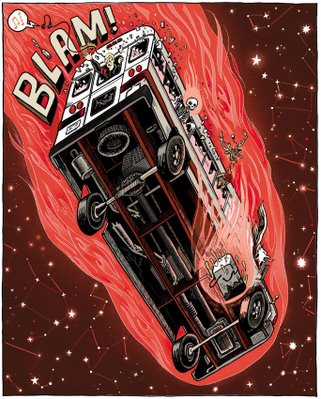 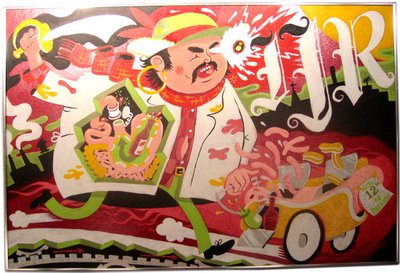 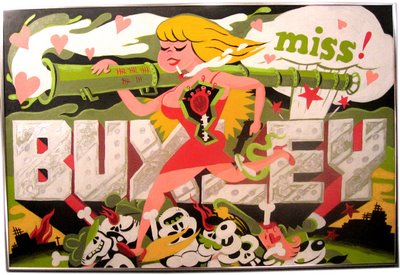 HEY: Here's how those paintings I was talking about earlier panned out. The photos (click for larger views) aren't that great -- mostly because I used so much SILVER LEAF PEN on the paintings -- but they should give you an idea. I think the show is gonna be up for a couple more weeks down at Mad Art, so check 'em out in person if you're so inclined. Each painting is 36"x24" and is made of spray paint, acrylic paint, and SILVER LEAF PEN on Bainbridge Board.
Posted by Dan Z. at 5:04 PM 3 comments: 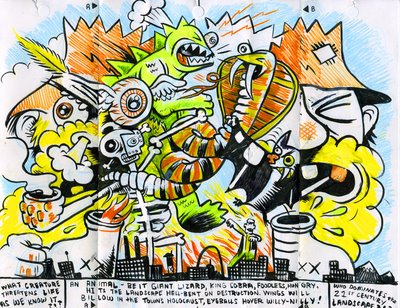 Last night at Drawing Club we all drew Mad Magazine style Fold-Ins. I have had some experience in this area before, but these things are still tough to do. Much respect to the master. It was made especially tough because I was trying to drink one of these stupid/delicious things while drawing:

Speaking of stupid/delicious, here's what my drawing looks like when folded in. Hint: the other theme of the night was HILLBILLIES! 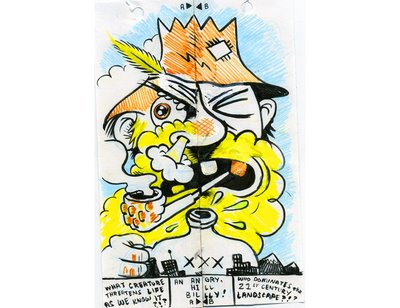 Come down to the MadArt Gallery this Friday night (the 5th) for the opening of an art show that I am involved with. The name of the show is Famous Fictional because every artist was responsible for two portraits: a character from popular literature and a well-known comics/cartoon personality. Speaking of well-known personalities, lots of them made stuff for the show: Matt Kindt, Mardou, Ted May, Kevin H (spoilers), The Hurtt Locker, Jessi Kelley, Nathan P, RON DMC, etc. Since I neglected to photograph either of my paintings before dropping them off at the gallery, here is some background on my characters and some mouth-watering preparatory sketches. First are some doodles I made while re-reading one of my favorite books, A Confederacy of Dunces by John Kennedy Toole.

The main character in the book, Ignatius J. Reilly, is a sort of modern Don Quixote figure who spearheads revolution at a pants factory in industrial New Orleans then later becomes a bucaneering hot dog vendor in the French Quarter. He lives at home with his mother but the main woman in his life is Lady Fortuna from Boethius' CONSOLATION OF PHILOSOPHY. He's got a hyperactive Pyloric Valve and his favorite soda pop is DR. NUT.

"When a true genius appears in the world, you may know him by this sign, that the dunces are all in confederacy against him." Jonathan Swift (Thoughts on Various Subjects, Moral and Diverting)

My cartoony character is Miss Buxley from the Beetle Bailey comic strip. In case you can't picture her, she is the "bombshell" civilian secretary at Camp Swampy where she works for General Halftrack, a golf and sexual harrasment enthusiast. She has dated Beetle Bailey, Zero, and Killer in the past, but her current relationship status is unclear. In the 80's Miss Buxley received a politically correct makeover, in which her neckline was raised and mini-skirt lengthened, but my painting features the original version. (You're welcome, fellas!) Missourian Mort Walker, creator of Beetle Bailey, also created the comic strip BONER'S ARK.

"Maybe she can't type, and the only filing she's good at is her fingernails, but she's always one step ahead of her foolish old boss" - The King Features website

Anyway, if you have any interest in seeing how the paintings turned out you should drop by. I have seen a bunch of everybody else's stuff and what I have seen is dynamite*. Also, I think there will be food and a cash bar and that sort of thing. And If you 've never been to MadArt before, it's worth the trip alone. It's a converted 1930's art-deco police station, with functioning jail cells in case you party too hard... or not hard enough. See you there!

Above: postcard drawing by Luby, Jason Robards, and Matt Kindt.
*If anybody is putting together a show of portraits featuring 70's sitcom characters, please get in touch.
Posted by Dan Z. at 4:29 PM 2 comments: