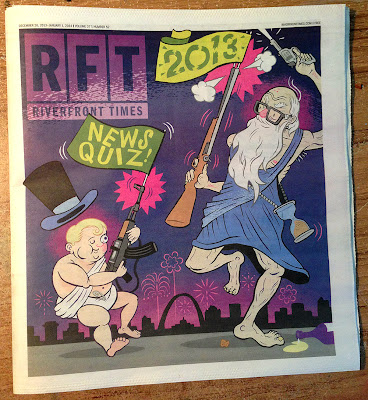 Once again, here's the cover to this week's RFT, and a bunch of weird stream-of-trivia-news-consciousness illustrations for the quiz. Here are sketches and final watercoloured art for each interior spot (click to see 'em larger): 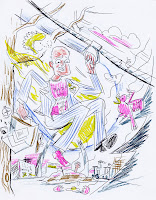 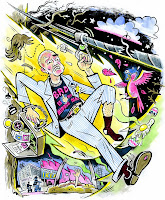 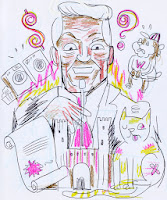 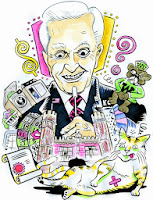 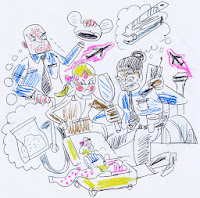 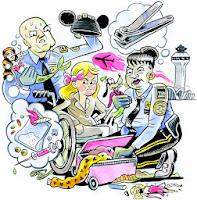 And here were my ideas for the cover: 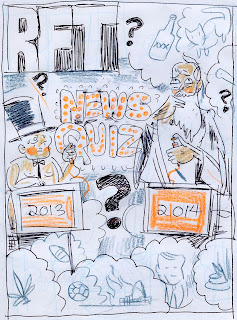 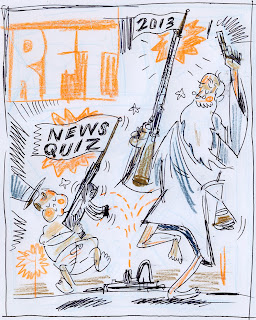 Once again I was happy to indulge one of my favorite visual metaphors, Baby New Year vs. Father Time. These characters have a rich history of among illustrators, going back to (and probably further back than) the gods Chronos & Saturn. . 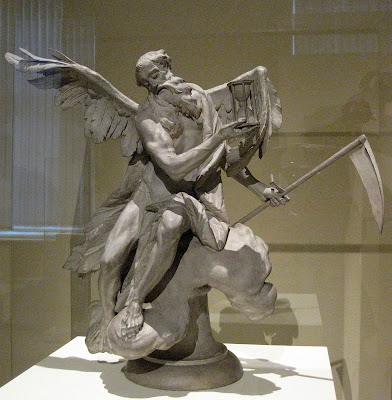 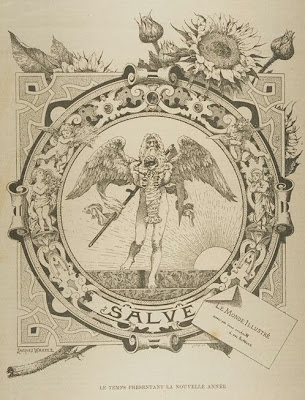 In the earliest days there seemed to be a real adversarial relationship between Father Time and his offspring, Baby New Year, which continued into medieval times. 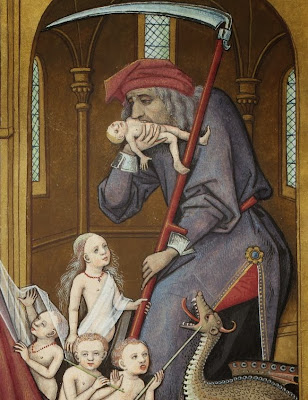 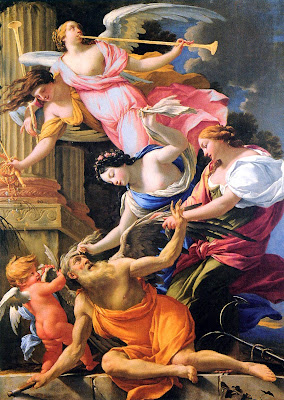 I like this painting by Simon Vouet, which suggests that by the 17th century, Father Time and Baby New Year were at least fighting on the same allegorical side, the "team of time." Here they are being vanquished by Love, Venus & Hope in the painting Time Vanquished by Love, Venus and Hope, c. 1646. Then political cartoonists, for good or bad, got ahold of them. 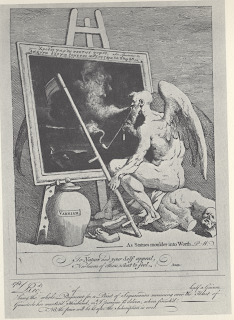 William Hogarth, Time Smoking a Picture, 1761.
But the high point of visibility of these characters has to the 2nd and 3rd decades of the 20th century, specifially the time frame in which J.C. Leyendecker 's covers of The Saturday Evening Post were an annual milestone. 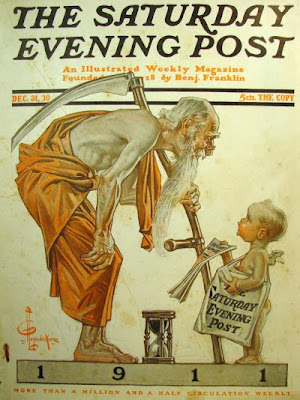 At this point the duo seemed to have developed more of an avuncular relationship, gentle but competitive. Less a passing of a torch then a passing of a joy buzzer. Or the inevitable inter-generational gesture of "pull my finger". 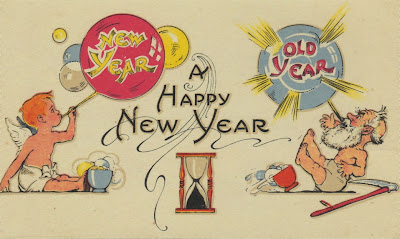 This relationship between past and future is what I'm going for with my RFT year-end quiz covers. Here was mine from 2010. 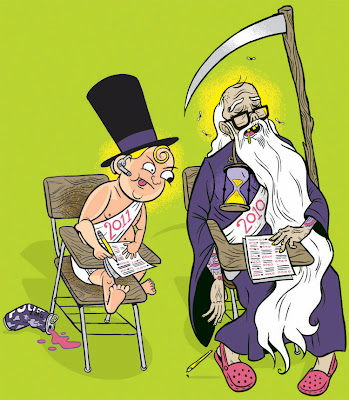 Anyway, back to this year! We went with the sketch with these guys doing some celebratory faux-gunfire together. Here's a tighter sketch: 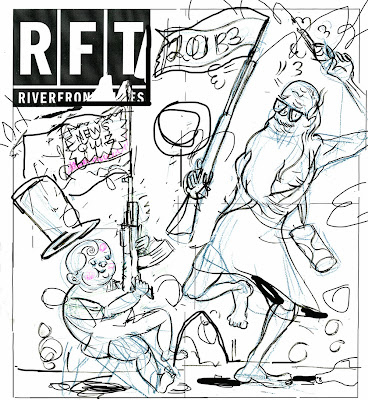 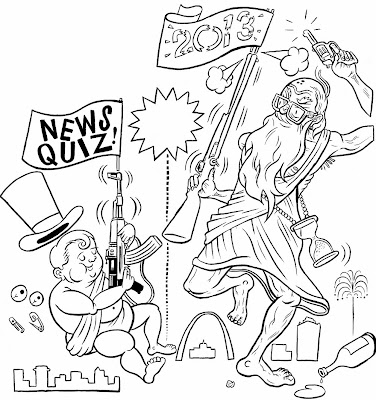 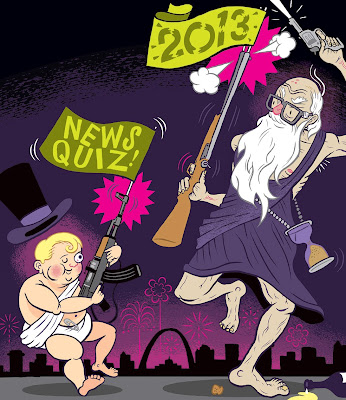 (This might be a good time to advocate for Fun without Guns this New Years Eve.) 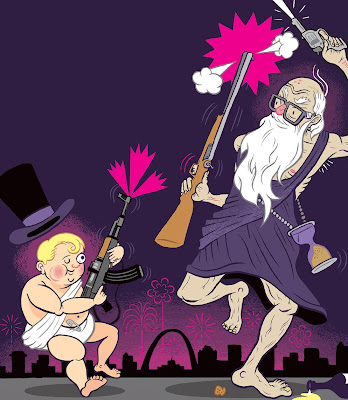 Hope everyone has a safe and fun New Year! 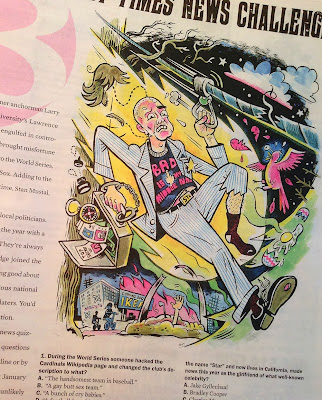 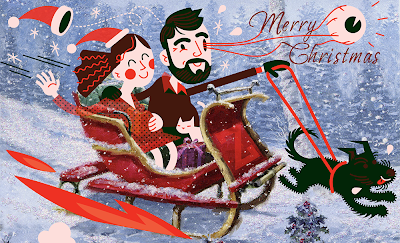 We found these cheap, sparkly readymade cards at Big Lots (32 for $5) and designed our art to print right on top. 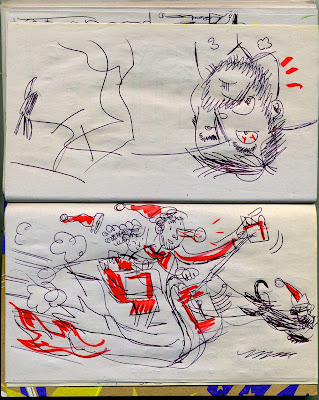 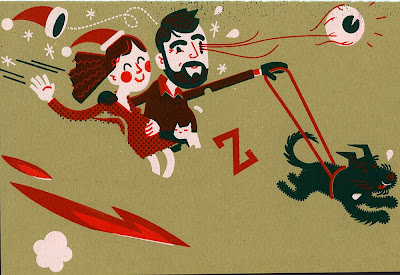 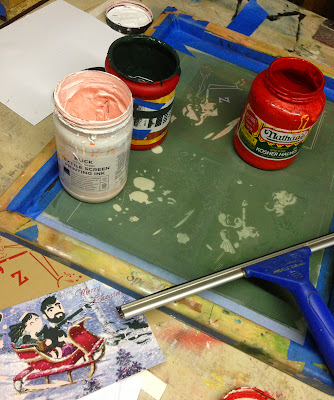 A note of warning to everybody out there preparing to print on glitter-covered surfaces: don't! 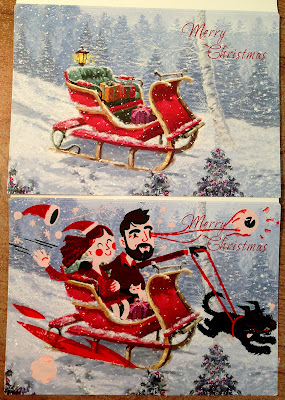 But they turned out okay. Merry Christmas everybody!
Posted by Dan Z. at 9:28 AM 1 comment: